Deep brain stimulation is a specialized treatment used for the treatment of movement disorders such as dystonia, Parkinson’s disease, and essential tremors. Recently, the use of this procedure has been shown to be highly effective in the treatment of obsessive-compulsive disorder. It is a neurosurgical procedure that involves the placement of a device called deep brain stimulator, which sends signals to specific areas of the brain to stop the symptoms associated with a movement disorder.

Deep brain stimulation is conducted across all major neurosurgery hospitals. This is a highly sensitive and a critical procedure that involves the placement of electrodes within specific areas of the brain that trigger symptoms associated with the motor disorder. This is the reason why this procedure must be conducted by only an experienced and skilled surgeon. India is known for its brigade of highly qualified brain surgeons who are mostly educated from the best medical universities in the world.

People suffering from Parkinson’s disease show symptoms of tremor, stiffness, rigidity, slowed movement, etc. Deep Brain Stimulation helps ease tremor and improves the stiffness and slowness in a remarkable manner. Even the tremor caused due to Essential Tremor simply gets wiped out with DBS. Dystonia patients get relief with the help of DBS as it relaxes muscles and improves irregular posture which is caused by muscle contraction. Taking everything into account, Deep Brain Stimulation helps enrich the quality of life of its patients. 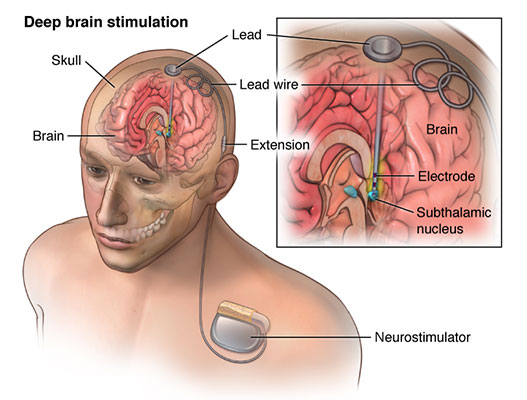 Why should you opt for Deep Brain Stimulation in India?

Deep Brain Stimulation in India is a top choice for many patients from all over the world because of the cheaper costs of the treatment as compared to those in western countries. On top of that, one can find the best DBS surgeons in India who are internationally trained professionals and have undertaken countless cases of Deep Brain Stimulation.

Patients travel from overseas to India for Deep Brain Stimulation as the western countries charge way too much for the surgery as compared to Indian cost of DBS. Some of the patients have some other reasons as well for choosing India for DBS such as unavailability of good hospitals or lack of advanced technology, etc. These are few of the many notable reasons why patients from outside the country opt for DBS in India.

How much is the cost of Deep Brain Stimulation India?

One can easily take advantage of the Indian Medical Industry which boasts of holistic hospitals, health experts and modern technology at a very low price tag. Such prominent recognition that India has received in its medical field is due to its emergence as the one-stop destination offering cost-effective medical care along with surgical and therapy practices.

The cost of Deep Brain Stimulation surgery is highly economical as opposed to western territory. To be more specific, the approximate cost of DBS in India is 60 to 90 per cent cheaper than the other parts of the world. It is one of the many significant reasons why foreign patients choose India over the other fully developed countries.

Which are the top neurosurgeons in India for Deep Brain Stimulation in India?

Although one can find countless number of highly-qualified neurologists in India for the surgery of Deep Brain Stimulation, some of the topmost and reputed DBS neurologists are as follows –

Having his MD in Internal Medicine and Medical Oncology, Dr Sumit Goyal has more than a decade of experience in the field of neurology.

Dr SK Sogani is an MS in General Surgery and Neurosurgery which he has done from the most renowned hospital of India AIIMS. From AIIMS again, he did his super specialization in neurosurgery and now has more than two decades of expertise in neurology.

Having done his Masters in Internal Medicine, Dr Alok Gupta completed his DM in Medical Oncology from Mumbai. He also has more than a decade of experience in the neurological field.

What is the success rate of Deep Brain Stimulation in India?

With the help of advanced neurology hospitals along with modern technology and extremely professional neurosurgeons, Deep Brain Stimulation in India exhibits a high success rate. In India, the patients are treated with utmost care and under the supervision of very qualified neurosurgeons holding a rich experience in their area of expertise.

Which are the best cities for Deep Brain Stimulation surgery in India?

There are many cities in India where one can get the best surgery for Deep Brain Stimulation. However, the best cities that you can blindly trust to get exceptional DBS surgery are Gurgaon, Bangalore, Mumbai, Noida, and Delhi.

What are the conditions for which DBS Surgery in India can be treated?

Deep Brain stimulation is surgery or rather a procedure where a medical device called a neurostimulator is placed in the body of the human. The neurostimulator device that is placed in the body is often called a brain pacemaker. Dbs surgery recovery time is also quite less. The brain pacemaker is almost the same as how a heart pacemaker works. The deep brain stimulation cost in India varies with the grade of the device that is used in the surgery. The deep brain stimulation cost in India is justified when you think of the procedure itself. The brain pacemaker is implanted into the patient under the skin of the patient near the upper chest area. The sheer complexity of this type of implantation surgery is enough to justify the deep brain stimulation cost in India. Also, there is a wire that will travel from this device and then connect to the electrodes in the brain of the patient. This treatment is used to treat many neurological conditions such as :

Many people look at the deep brain stimulation cost in India and start wondering if the surgery will be successful if it is performed in India. The main thing that should be considered is that India is a developing country. Because of this, the deep brain stimulation cost in India is affordable, not only to the people who are living in India, but also people who are coming here from abroad countries to have this surgery.

The DBS surgery cost in India has nothing to do when it comes to the amount of care and the number of services that the Indian hospitals and doctors have to offer. People will get the same quality care, and the Dbs surgery recovery will be the same if it was performed in other expensive places also. Indian surgeons have practiced all around the world and have enough experience in the field that is needed to make deep brain stimulation surgery successful. The amount of expertise among the doctors are extremely high and worth mentioning. The post-operation treatment and care rendered to the patients are quite impressive.

What is the recovery process post-surgery for Deep Brain Stimulation in India?