Brazil officially called the Federal Republic of Brazil is the largest country in Southern and Latin America. It has been reported that Brazil is the fifth-largest country in the whole of the world in terms of area occupied and the population. Medical Tourism in Brazil is one of the fastest growing medical treatments hotspots for Americans looking for treatment abroad.

Overview of Medical Tourism in Brazil 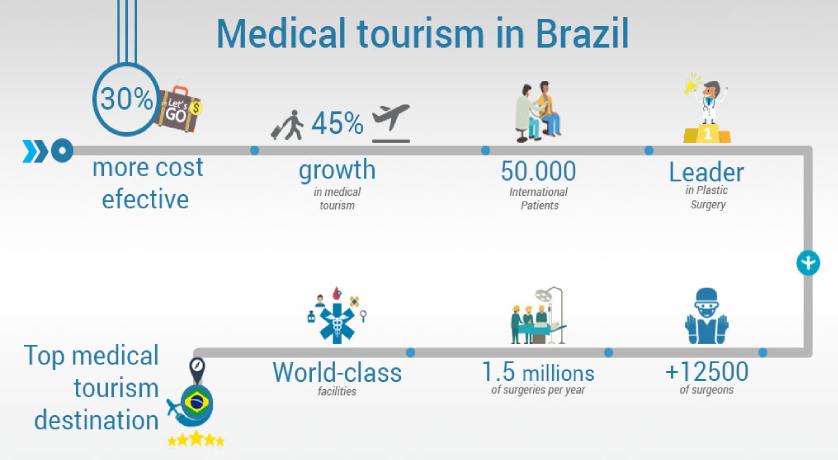 Brazil is a home to foreigners seeing world-class cosmetic surgeries. The doctors for plastic surgery are quite advanced and specialists in their field. Till now, Medical tourism in Brazil was limited to Elective procedures, but the country has really emerged with its first JCI-accredited hospital, making it the first place outside the United States with JCI accreditation. Now the country as more than 40 JCI accredited. Medical Tourism rate in Brazil is expected to increase by 45% in the coming five years’ time.

Brazil has been recognized as a World’s Capital for Cosmetic and Plastic surgeries. Although the country is in the USA still the number of surgeries/capital of this country is higher than the USA.

This country has some qualities that make it a perfect destination for the Medical Tourists:

List of 6 Best Hospitals in Brazil is given below:

Check out other Popular Destinations

Cost Of Medical Treatments In Brazil

Treatments That Brazil Country Is Best Known For

For tourists Visa, valid passport for 6-months is required. Fill up all the credentials asked in the Brazilian Visa application form and make sure you fill the details accurately because this form will expire in 30-days’ time. Applicants’ passport size photograph, address proof, departure proof, medical certificate, especially for children’s vaccination card is very important to apply for the tourist visa.

A Medical Tourist Visa is basically required for people traveling to this country for some Medical Treatments. Currently, temporary Visa is available for the foreigners under this category, but it should be valid to enter the country for medical assistance. A foreigner must have a valid passport of validity up to 6-months after arriving in the country. Some country residents are given a tourist visa on arrival and later they can seek medical treatment in the country. This visa is available only for 90-days. However, the limit can be extended to another 90-days once in 12-months’ time.

Some travel tips for Medical Tourists in Brazil:

Could not Find What you are Looking for?

January to March: During these months days are hot, and the rain is at its start. February is the favorable month to travel.

April to May: It is the best time to visit this country.

June-July: It is another best time when the school holidays help keep roads free, and fresh air makes your day happier.

August to October: These months are best for cloudy sky lovers when the spring season is arriving.

November to December: The weather during these months is dry and summer season is at its peak so you can avoid these months when planning your tour.

Is Brazil safe for tourists?

Brazil, although has a reputation as one of the dangerous country, believe it or not, the crime rate has considerably decreased in this country, and the government has laid certain rules and guidelines that have made this country a better place for Medical Tourists.