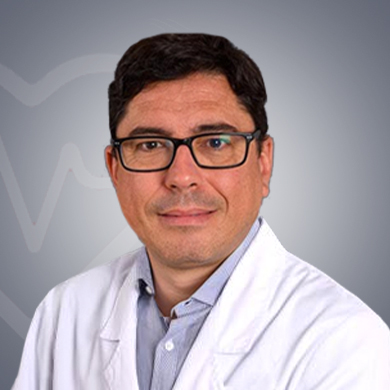 Dr Knorr is a reputed pediatric orthopaedic surgeon in Spain. He has over 20 years of experience in this field. His areas of expertise include Knee ankle foot treatments, Minimally invasive surgeries such as Hallux valgus, Congenital disorders (metatarsus adductus; arthroscopy procedures-Meniscal repair, Pediatric ACL,  Intraepiphyseal techniques, traumatology. Dr knorr graduated from the University of the Basque Country. Spain. He was previously associated as the Head of the Pediatric Orthopedic Surgery and Traumatology Service. Sant Joan de Déu University Hospital in Barcelona. Currently, he is a Traumatologist and child orthopaedic surgeon at the Teknon  Medical centre

Dr Knorr is a well known and experienced pediatric orthopaedic surgeon. He has published over 46 research articles in several national and international journals. He has also written chapters in several books. He won the Elsevier-Masson Award for his report on the treatment of congenital scoliosis. He is a member of the Spanish Society of Pediatric Orthopedics, Spanish Arthroscopy Association, Association of the Study of Internal Fixation, etc.

Frequently Asked Questions
How many years of experience does Dr Gorka Knorr have being a paediatric orthopedic surgeon in Spain?

Dr Knorr has over 20 years of experience as a paediatric orthopaedic surgeon.

What are the primary treatments and surgeries does Dr Gorka Knorr do as an orthopaedic surgeon?

How much does it cost to tele-consult with Dr Gorka Knorr?

It costs 530USD to tele consult with Dr Knorr

What associations is Dr Gorka Knorr part of?

He is a member of the Spanish Society of Pediatric Orthopedics, Spanish Arthroscopy Association, Association of the Study of Internal Fixation, etc.

When do you need to see an orthopaedic surgeon such as Dr Gorka Knorr?

For consultation regarding diagnosis and treatment of orthopaedic disorders, congenital defects such as scoliosis, arthroscopic techniques for children we can consult Dr Knorr

How to connect with Dr Gorka Knorr for Online Consultation through MediGence?

The expert paediatric orthopaedic surgeon from Spain can be easily consulted by registering your profile with MediGence and writing down your query. An appointment for a consultation with the expert will be scheduled. After the payment via PayPal, the Online Teleconsultation will connect the expert and the patient through a live F2F session.