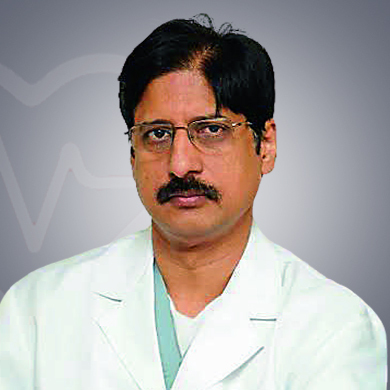 Dr. Sudhakar Prasad is one of the most renowned plastics and cosmetic surgeon in Hyderabad. Dr. Prasad is presently working as a Trauma plastic and cosmetic surgeon. He is also a highly experienced and extensively trained surgeon with more than 28 years of experience. He was previously associated with the Institute of Hand and Plastic Surgery, CMC, Tata Memorial Hospital, and Nizams Institute of Medical Sciences. Dr. Sudhakar Prasad completed his MBBS from Guntur Medical College, Guntur in the year 1981. Later, in the year 1985, he completed MS in General Surgery from Guntur Medical College, Guntur. He was later awarded M.Ch. in Plastic & Reconstructive Surgery by Kilpauk Medical College, Chennai in the year 1988. Dr. Prasad obtained a fellowship from various reputed organizations such as Fellow in Maxillo-Facial and the Cosmetic Surgery University of Miami, Fellow in Maxillo-Facial Surgery, Davos, Switzerland. And Fellow in Cramo Facial Surgery, Taipei, Taiwan.

Dr. Sudhakar Prasad is an expert in performing various plastic and reconstructive surgeries. During his illustrious career, he has performed several surgeries including hand surgery, microsurgery, head and neck reconstruction surgery, Maxillo-Facial and Cosmetic Surgery, and Cranio-Facial Surgery. He has done a large number of the microvascular fibula and both hands re-implantation. He was the recipient of the Young Scientist Award in 1992 and was awarded Best Paper in Microsurgery in the year 1994. Dr. Prasad has a special interest in Plastic and Reconstructive Surgery. The research paper of Dr. Sudhakar has been published in various journals. Dr. Prasad was the President of the Indian Society for Microsurgery from 2002 – 2004 and is also the reputed Member of the Asia Pacific Cranio-Facial Association.

Abdominoplasty is a cosmetic surgical procedure that is popularly known as tummy tuck. This procedure is used to remove excess fat from the abdominal region and give a taut stomach to an individual who wished for it. Dietary changes and exercising is one way to keep the body sleek and taut. However, sometimes even exercising may not help reduce abdominal fat. Abdominoplasty is opted by individuals who are in dire need of losing abdominal fat. This surgery works by removing extra fat and by tightening the muscles of the abdominal wall.

A tummy tuck is not the same as liposuction, however, both the procedures can be conducted together. Abdominoplasty may seem like a simple procedure, however, it is a major surgery. Abdominoplasty should only be preferred by men and women who are in overall good health but need to tone loss excess fat from their abdomen. Women who have had given birth to several children can also opt for this procedure for the tightening of the abdominal muscles. Additionally, this procedure is also suitable for people who have lost a considerable amount of weight and now need to get rid of loose skin around their abdomen.

A tummy tuck is not suitable for the following people:

The idea of youthfulness for women has been fairly associated with how well structured their breasts are. But with time and because of several other reasons, the breasts may start drooping. This may diminish physical appeal and self-confidence.

There are many women in the fashion and entertainment industry who often go for breast augmentation surgery or mammoplasty to enhance their appearance. Many other women who feel low due to small breast size or drooping breasts undergo breast augmentation to feel better.

Some of the reasons why a woman may decide to undergo breast augmentation include the following:

Drooping breasts or small-sized breasts can be a real problem when it comes to wearing clothes. A woman may also feel uncomfortable due to the non-uniformity of the two breasts or may feel heavy at times.

Breast augmentation is the second most popular surgical procedure performed on women in the US.  Silicone implants or many other kinds of gel-filled or saline-filled implants are inserted in the breast pocket to augment their size and make it look fuller and appealing.

Nose plays a very important role in defining one’s personality. The entire contour of the face changes with a well-defined nose in place. Rhinoplasty is a cosmetic procedure performed on the nose to enhance its appearance. It is also known as rhinoplasty or nose reshaping. The shape and size of the nose can be changed drastically to improve the features of the face.

Rhinoplasty surgery is mainly performed for aesthetic reasons. An accident or too big or too small appearance of the nose can be given a proper shape with the help of rhinoplasty surgery. A nose can get mutilated or crooked due to some injury or accident which can be corrected through a surgery. Minor problems in breathing can also be attended.

People with abrupt or deformed shape of the nose may experience problems in breathing and subsequent problem in talking normally. Rhinoplasty surgery can help provide great relief to such people.

Nose plastic surgery is commonly performed on both men and women. In fact, it ranks third in the list of most commonly performed cosmetic surgeries. The shape of the nose can be altered through rhinoplasty by addition or removal of bones, cartilage, and tissues or by performing grafting.

Ageing individuals always have an urge for youthfulness or rather a more youthful appearance. This has led to an increased demand for treatment to reduce facial lines, wrinkles, frown lines, laugh lines and to plump lips and cheeks. Additionally, people also look forward to changing the appearance of their hands, feet, earlobe, and décolletage (chest, neck, shoulder, and upper breast area).

Many treatments are now available to fulfil the dreams of the people who wish to regain their youthful appearance. One such option involves injecting dermal fillers into the muscles that have changed in appearance due to ageing, sun exposure, or some other reason.

Temporary dermal or cosmetic fillers include materials such as collagen injections, hyaluronic acid gel, calcium hydroxylapatite, and poly-l-lactic acid. These fillers are used to correct the following areas:

Liposuction is a common cosmetic surgery performed to remove stubborn fat from the skin. It is also known as lipoplasty and suction-assisted lipectomy. This procedure is performed by an experienced cosmetologist or anaesthetist to give a sculpted look to the body and beautify the overall look of the individual with proper contouring.

There can be regions of the skin that have localized fat. Such regions may include calves, abdomen, thighs, and arms. If these regions are resistant to diet and exercise, then a liposuction surgery is performed to remove them.

Liposuction is the most commonly performed cosmetic treatment among both men and women. It aims to extract the extra fat through a suction device to give a more toned look to the body. The finishing of such surgeries is extremely important.

Mentoplasty or chinplasty, and also known as genioplasty, is the surgical procedure by which chin line or chin can be corrected or improved to enhance the overall appeal of a face. The word mentoplasty has its origin from the Latin word “mentum,” which means “chin” and Greek word “plassein” refers to the word “formation.” With the help of a well-defined chin line as per the rest of the face, more masculine or feminine features are enhanced.

Mentoplasty or chin implant surgery can be a solution for quite a number or abnormal conditions. For a more youthful look, many consider facelift as well. Malformation of the chin resulting from developmental abnormalities in the jaw bone can be a reason. At times, any one side of the jaw has been growing, while the other side did not result in the asymmetry of the face. Congenital agenesis is a condition wherein some of the jaw bones are missing.

Chin implants give shape to a chin that has grown out of proportion compared to the rest of the facial features. The size and shape of the chin are different among men and women. As a result, many people choose to have a mentoplasty done along with their gender transition surgeries.

At times mentoplasty is included as part of craniofacial reconstruction following cancer treatment or any other kind of trauma. In an orthognathic surgery, the facial bones are realigned to enable the patient to talk and chew normally. Mentoplasty can also be combined with this.

Mentoplasty and chin implants are mainly used in adults since the jaw bone has already acquired its full size and form and there are no chances of any permanent tooth coming up in the gum. The procedure is mostly performed on people with small chin to increase its size.

Sclerotherapy is an effective and minimally invasive treatment of varicose and spider veins. It is also known as spider vein treatment. This procedure involves the injection of a solution directly into the affected veins, causing them to shrink and eventually disappear.

Varicose veins treatment can improve the symptoms of venous insufficiency. This therapy is the primary treatment for small varicose veins in the legs. It relieves some of the spider veins symptoms, including ache, burning, swelling and night cramps.

Spider vein treatment typically results in the elimination of up to 50 to 80 percent of varicose veins that are injected with the treatment solution. It is a minimally-invasive procedure that ensures minimal recovery time as the treated veins tend to fade within a few weeks.

Otherwise healthy people with venous insufficiency that is poorly controlled with compression stockings are the best candidates for sclerotherapy.

The eligibility of the candidate is decided based on the overall health of the patient and the area requiring treatment, in addition to the reason behind the clot in the vein. The dermatologist helps select the correct chemical sclerosing agent, which is then injected into the blood vessel to make it collapse.

This treatment is not suitable for pregnant women and females on birth control pills. Selected veins may not be treated using sclerotherapy if that vein could be put into use during future heart bypass surgery.