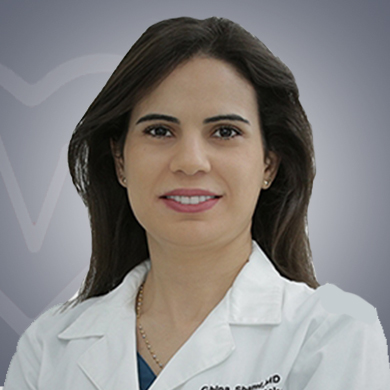 qualified. Dr. Ghina Shami has been associated with many hospitals over the course of his illustrious and experienced career.

Dr. Ghina Shami has more than 15 Years of clinic experience. The Clinician specializes in and performs the following surgeries:

Which conditions may need IVF support?

The different types of treatments available for IVF are:

Sometimes the embryo is thick, which decreases its ability to hatch on its own. Making a hole or thinning the outer layer may help the embryos to hatch, which increases the chances of pregnancy. Pregnancy cannot occur unless the embryo hatches. Thus, assisted hatching IVF success rates are higher than simple IVF success rates.

Because of the use of additional technology, IVF with laser assisted hatching cost is higher than just IVF cost.

IVF with laser assisted hatching is recommended when:

It is performed by using 1.48-μm diode laser. The technique does not cause any blastocyte damage. Laser assisted hatching has several advantages such as minimal handling of the embryo,  fast delivery, and exact control over the drilling of the hole.

It is performed before transferring the embryo into the mother’s womb on day 3, 5, or 6 after fertilization. An opening in the zona pellucida is created by drilling it with acidified tyrode’s solution.

The embryo is held firmly using holding pipette and a microneedle is applied the area of zona pellucida. The microneedle is preloaded with Tyrode’s acid using mouth-controlled suction before each micromanipulation.

IVF with egg donation is mostly performed in the case of women who have number of eggs or whose eggs are compromised with respect to quality. The IVF specialist the woman to opt for donor eggs in case they believe that there are minimal chances of IVF success because of quality of her own eggs.

Intracytoplasmatic sperm injection (ICSI) is an IVF variation in which the sperm is directly injected into the egg for fertilization. The resulting fertilized egg is placed in of the woman. It is the most successful infertility treatment used to treat sperm-related conception problems in couples.

ICSI procedure does not require the sperm to penetrate the layers of the egg. It is highly useful to treat infertility problems in couples who suffer because the male partner’s sperms are either not able to get into the egg or are unable to fertilize the egg even when they are able to get through it.

During IVF with ICSI procedure, the eggs are extracted and held in one place with the help of a glass tool. A single sperm is injected into each egg using a small glass tube. The eggs are cultured and checked for fertilization overnight. The fully fertilized eggs are selected. A few fertilized eggs selected are placed in the uterus with the help of a catheter. The leftover embryos are preserved for future use.

While in simple IVF, the eggs and sperms are mixed together and allowed to fertilize naturally, in ICSI, a sperm is forced into the sperm for fertilization.

ICSI success rates largely on the quality of sperms used for fertilization. Overall, the success rate of ICSI is greater than any other technique used as a variation in the IVF procedure.

IVF with ICSI and Donor Sperms

ICSI treatment involves the injection of a single sperm directly into the egg from the female partner or a donor. In the case of ICSI with donor sperms, a semen sample from a suitable donor is retrieved. The sperm sample is processed and viable and good quality sperms are extracted from for further procedure.

Next, the entire ICSI procedure is conducted in a similar manner. ICSI success rates are the same whether the sperm comes from a donor or the actual male partner. ICSI treatment cost is separate from the cost of IVF.

Optical spindle view is a specialized technique used at the time of IVF and ICSI. This technique helps the fertility specialists view the division of cells carefully to ensure that the entire process goes on smoothly.

The optical spindle view technique is used after the fusion of the eggs and the sperms complete using ICSI as a part of the IVF procedure. The use of this technique helps that the ICSI procedure is successful and that no DNA damage place around the site of injection of the sperm.

IVF with ICSI and Testicular Biopsy

Sometimes during IVF and ICSI, the fertility specialist may order a testicular biopsy to assess testicular function in the male partner before using his sperms. During biopsy procedure, a small sample of tissue from just one or both the testicles is removed and examined under a microscope. The specialist confirms whether the male partner is fertile or not and accordingly donor sperms are arranged for IVF and ICSI.

Get a Priority Appointment with
Dr. Ghina Shami