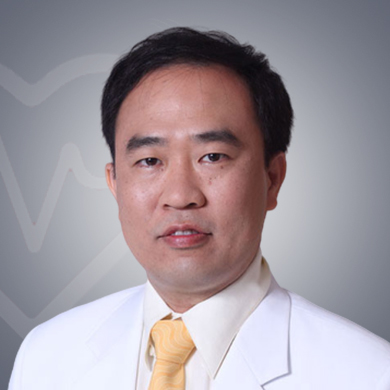 qualified. Dr. Kamol Pataradool has been associated with many hospitals over the course of his illustrious and experienced career.

Dr. Kamol Pataradool has more than of clinic experience. The Clinician specializes in and performs the following surgeries:

A dramatic reduction in cervical cancer occurrence is primarily due to the widespread use of advanced screening tests such as pap tests to detect cervical abnormalities and allow for early treatment.

Where does cervical cancer take place?

Under normal circumstances, the ectocervix is covered with flat, thin cells called squamous cells and the endocervix is made up of another kind of cells called columnar cells. The area where these cells meet is called the transformation (T) zone. The T zone is the most likely location for cervical cancer cells to develop.

A majority of cervical cancer cases occur because of a virus called human papillomavirus (HPV). HPV is a sexually transmitted virus. It can transfer through  contact with an infected male partner.

There are many types of the HPV virus and not all types of HPV cause cervical cancer. Some of the HPV may cause genital warts. Some other cervical cancer risk factors include smoking, weak immune system, oral contraceptives, and multiple pregnancies.

Ovarian cancer refers to the abnormal growth of cells in the ovaries, which are an important part of the female reproductive system. Ovaries are two small glands, located on either side of the uterus. They help produce female sex hormones and store or release eggs. An ovarian tumor is it is the eighth most common type of cancer among women. It is the fifth most common cause of cancer deaths in women around the world. Ovarian cancer can be life-threatening if not diagnosed and treated on time, however, the chances of survival are great in the case of early diagnosis.

Ovarian cancer forms when normal ovarian cell growth fails, and there is an uncontrolled growth of cells. Most of the ovarian cancers arise from the lining cells (epithelium) of the ovary. The ovarian tumor can metastasize and spread to other organs of the body.

The risk of ovarian cancer is also high in women suffering from familial melanoma, which is characterized by the presence of certain genes. These genes are inherited from parents and mostly occurs when two or more relatives suffer from the aggressive form of melanoma or skin cancer.

These signs of ovarian cancer can be confused with those of ovarian cyst. However, patients must know that ovarian cysts are far more common and primarily affects women during their childbearing age.