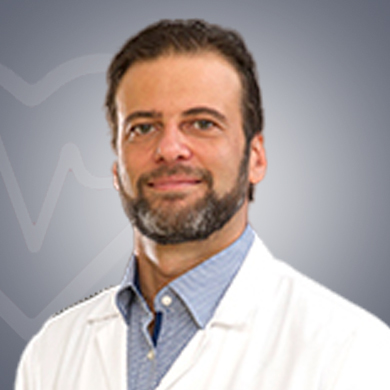 Dr Gilbert Ayoub is the chairman and HOD of the general surgery at the NMC Royal Hospital, Abu Dhabi, United Arab Emirates. He has over 20 years of experience in his field and even performs cancer surgeries. After obtaining his medical degree from Russia he went on to pursue his medical Education and Master Degree in General/Visceral Surgery at St. Marie Hospital in Siegen (academic teaching Hospital of the University of Marburg in Germany). He specialises in umbilical, ventral, inguinal and incisional hernia repair, appendectomy, Cholecystectomy and Colon Resections, as well as noncardiac thoracic VATS Surgeries (Thoracoscopy, partial Lunge Lobectomy and Resection).

What is colon cancer?

Some types of polyps can change into cancer over the course of several years. But it does not mean that all polyps have the tendency to become cancerous. The chance of changing a polyp into colorectal cancer depends on the type of polyp that grows.

Colorectal cancer can affect men and women equally. However, studies have proven that men might develop it at a younger age.

There are no early signs of colorectal cancer, but once it grows, the patients may experience the following colon cancer symptoms:

Lung cancer is an uncontrolled growth of cells that start off in the lungs. Usually, lung cancer starts in the cells that line the air passages. Instead of developing into healthy lung tissue, the cells divide rapidly and form tumours.

Lung cancer can grow and spread beyond the lung to reach other parts of the body through metastasis. Lung cancers can begin in any part of the lung, but 90 percent of lung cancers begin in the epithelial cells, which are the cells lining the larger and smaller airways also known as bronchi and bronchioles.

This is the reason why lung cancers are sometimes called bronchogenic cancers or bronchogenic carcinomas. Lung cancer is the most common cancer in the world, among both men and women. It is the leading cause of cancer deaths worldwide.

Long-term smoking is the main cause of lung cancer. After smoking, genetic factors and exposure to radon gas, asbestos, second-hand smoke or other forms of air pollution can also increase the risk of lung cancer.

It is necessary to determine the stage of lung cancer by finding out how far cancer has spread, before initiating treatment of lung cancer.
The following are the four lung cancer stages of NSCLC:

The following are the two lung cancer stages of SCLC:

After the determination of stage, treatment of lung cancer starts with choosing the best suitable option for the patient. However, there is usually no single treatment for lung cancer. So the patient often receives a combination of therapies and palliative care.

Frequently Asked Questions
How many years of experience does Dr Gilbert Ayoub have being a general laparoscopic surgeon in the United Arab Emirates?

Dr Gilbert Ayoub has over 18 years of experience in his field.

What are the primary treatments and surgeries does Dr Gilbert Ayoub as a laparoscopic surgeon?

How much does it cost to consult online with Dr Gilbert Ayoub?

It costs 160 USD for online consultation with Dr Ayoub.

What associations is Dr Gilbert Ayoub part of?

When do you need to see a laparoscopic surgeon such as Dr Gilbert Ayoub?

How to connect with Dr Gilbert Ayoub for Online Consultation through MediGence?

He can be easily consulted by registering your profile with MediGence and writing down your enquiry. A meeting with the surgeon will be scheduled. Following which the consultation can be done.