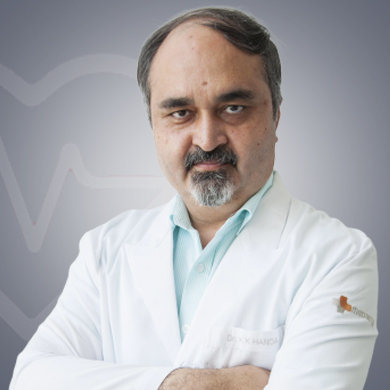 Dr. K.K. Handa is a well-known ENT surgeon in the Delhi-NCR region. He has more than 27 years of clinical experience. Dr. Handa is currently the head of the Department of ENT &amp; Head Neck Surgery, Medanta Medicity, Gurgaon. He has also worked at All India Institute of Medical Sciences as Associate Professor, and Post Graduate Institute of Medical Education and Research as Senior Resident. After completing his schooling from St Edwards, Shimla, and St. Columbus, New Delhi, Dr. Handa completed his MBBS from Armed Force Medical College, Pune in 1988. He completed his MS in General Surgery in the year 1993. In 1994, he passed DNB conducted by National Board of Examination, New Delhi. He received MNAMS from National Medical Academy, New Delhi in 1995. He was awarded Commonwealth Fellowship for Training in Lasers from Glasgow-Royal Infirmary, the U.K. in 2004.

Dr. K.K. Handa is a highly trained and experienced ENT surgeon. He has gained expertise in Laryngology, Voice Surgery, Cochlear implants, and Endoscopic sinus surgery. He is among the very few ENT surgeons in India who performs Robotic surgery, laryngeal framework surgery, and Botulinum Toxin injection for spasmodic dysphonia. His area of service includes Phonosurgery, Head neck surgery, Laryngology, Endoscopic sinus surgery, Surgery for sleep disorders, Ear surgery including cochlear implants, Transoral laser surgery, and Transoral robotic surgery. He is the recipient of various prestigious awards such as Marquis World&#39;s Who&#39;s Who, Best Otorhinolaryngologist, Times Research Foundation, 2012, First prize in Annual Conference of Association of Phonosurgeons of India, Best video presentation, 2007, and Dr. R.D Kumar Oration. More than 80 research articles of Dr. K.K Handa have published in several reputed journals. He is a member of the Association of Phonosurgeons of India, Neurootological and Equilibrium Society of India, Indian Society of Otology, Indian Society of Rhinology, and Reviewer Indian Journal of Pediatrics.

Cochlear implant is one of the several ways to treat hearing loss. It is an electronic device, a part of which lies on the cochlea (inner ear) and behind the ear that helps stimulate the nerve.

A cochlear implant is advised to a person suffering from complete deafness or partial hearing loss in one or both the ears. The device is used to bypass the usual or normal mechanism by which a person is able to hear external sounds.

Cochlear implant is typically suggested to patient with sensorineural hearing loss. This condition may arise when there is a damage to the tiny hair that are present on cochlea. These tiny hears catch the vibration of an external sound and transfer it to the auditory nerve, which then sends the signal to the part of brain responsible for hearing.

A typical cochlear implant consists of two parts – one is the stimulator, while the other one is a processor.

Pinnaplasty is a type of a surgical procedure used for the correction of prominent ears. This procedure is also known as otoplasty or ear pinning. This ear plastic surgery is conducted on people of both the sexes and of all ages, who wish to correct their ears that tend to stick out.

Some people may not bother about the “bat” shape of their ears, but, for others, continuous comments from others can lead to distress, particularly during school years. Pinnaplasty is the best and simple procedure that can solve the problem safely and quickly.

Ear pinning surgery involves making an incision just behind the ear in the natural fold where the ear joins the head. This lets the surgeon reshape the year by removing some part of the cartilage. The surgeon can then use permanent internal stitches to keep the ears in their new place.

Who are the best candidates for pinnaplasty?

The best candidates for pinnaplasty include both children and teenagers, although adults may choose to undergo the surgery as well. This surgery is not recommended for children younger than five as their ears will still be growing and developing.

You can go for pinnaplasty if your ears are protruding or sticking out at a prominent angle from your head. Pinnaplasty is typically carried out in people who have one ear that sticks out much more than the other. In such cases, pinnaplasty can restore the symmetry of ears.

Nasal polyps are fleshy swellings or polypoidal, benign/non-cancerous masses that develop in the lining of the nose and paranasal sinuses. They usually occur in both nostrils, though unilateral polyps rarely occur. Polyp formation in the nasal cavity is due to chronic allergic rhinitis, chronic sinusitis, and, less commonly due to underlying disease such as cystic fibrosis.

People from all age groups can get affected by ear disorders and hearing impairment problems. In the United States, a survey revealed that under the age of 65, over 60 per cent of the population suffers from problems related to hearing loss. However, almost 25 per cent of people aged above 65 experience a significant loss of hearing. Thankfully, different types of ENT surgeries are available to treat problems related to the ear.

Most often, people are diagnosed with problems related to the eardrum, or tympanum, and the infection in the cells of the mastoid bone. The tympanum is the thin membranous structure present between the outer and the middle ear. It vibrates when sound waves hit on it and this enables us to hear.

A repair surgery called tympanoplasty is required to treat a perforation or hole in the eardrum. The middle ear is sterile but due to rupture of the eardrum, an infection can also occur. It may also be required for repairing of tiny bones present behind the eardrum or ossicles in the mastoid bone. This repair is known as mastoidectomy.

Tympanoplasty and mastoidectomy are therefore conducted together in many cases. This procedure is known as tympano-mastoidectomy.

There are several reasons that may cause loss of hearing, including the following:

Symptoms of Hole in Eardrum

Some of the common symptoms of a puncture in eardrum include the following:

Type II tympanoplasty addresses membrane perforations with erosion in the bone malleus. Grafting is done on the incus bone or in the remains of the malleus.

Type III tympanoplasty is meant for destruction of two ossicles and intact and mobile stapes bone. A graft is placed on the stapes and it provides protection for the total assembly.

Type IV tympanoplasty is useful for cases of ossicular destruction, which has all or part of the arch of stapes included. A graft is placed around the mobile stapes footplate

Type V tympanoplasty is useful when the footplate of the stapes bone is fixed.

For treating Cholesteatoma, tympanoplasty can be combined with stapedectomy and mastoidectomy and in many cases, a second operation is required to ensure the infection is totally eradicated.

Get a Priority Appointment with
Dr. K K Handa