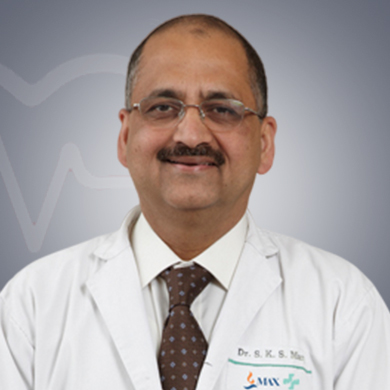 Dr. Sanjiv KS. Marya is one of the finest orthopedic and joint replacement surgeons in India. He has over 37 years of clinical experience. Dr. Marya is currently providing his expert services at Max Super Speciality Hospital, Saket, and Max Hospital, Gurgaon as Chairman & Chief Surgeon, orthopedics and joint replacement. He has also been associated with various other institutes during his illustrious career. He had worked as Junior resident at PGIMER, Chandigarh, and Senior resident at AIIMS Delhi. He has also been associated with University College of Medical Sciences, Delhi, Royal Hampshire County Hospital, Winchester, England, Indraprastha Apollo Hospitals, New Delhi, and Medanta Bone and Joint Institute, Gurugram Haryana. Dr. Marya completed his MBBS from the Pandit Bhagwat Dayal Sharma institute of medical sciences in the year 1981. Later, in the year 1984, he completed MS in orthopedics from PGIMER, Chandigarh. He completed DNB in orthopedics in 1985. In 1991, he completed his M.Ch. in orthopedics from the University of Liverpool, England. He has been awarded a fellowship from the Royal College of Surgeons in 2012 and a fellowship from the International College of Surgeons, USA.

Dr. Sanjiv KS. Marya is an expert in performing joint replacement surgeries of knees, hips, shoulder, and finger joints and has performed more than 15000 such surgeries. He has hands-on experience in managing trauma management by applying principles of AO. He is the pioneer for bilateral joint replacement. He has gained expertise in replacing the joints of the knee or hips in one sitting. He is also an expert in computer-guided joint replacement surgery. He is associated with various medical organizations of repute such as American Association of Hip & Knee Surgeons, Permanent Board Member Asia Pacific Arthroplasty Society, Indian Society of Hip and Knee Surgeons, and Indo-German Orthopaedic Foundation.