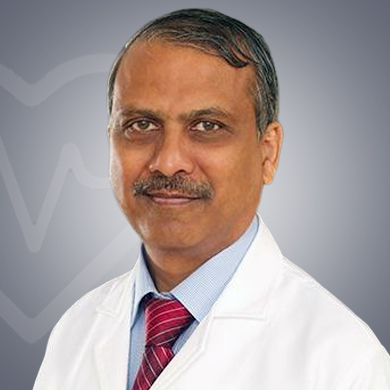 Dr. P. K. Agarwal is a distinguished professional with an experience of over 35 years in the field of orthopedic surgery. He has worked with the Indian Air Force as an Orthopedic Surgeon and then also worked in a hospital in Dubai.

He has acquired MBBS, MS (Orthopedics), MS (General Surgery), AO Fellow (Germany), Spine fellow (Edinburgh, UK), Ranawat Arthroplasty fellow (NY, USA). Furthermore, he has obtained a double Masters Degree, MS Orthopedics and MS General Surgery from India. Afterwards, he has received foreign fellowships during which he was trained for joint replacement in a renowned centre in New York (USA), Spine surgery in UK and Trauma in Germany. In addition to this, he worked as a Professor and Senior Adviser in the Department of Orthopedics, Armed Forces Medical College & affiliated Command Hospital, Pune, India.

Dr. Agarwal has regularly performed all kinds of trauma surgeries of limbs, arthroscopic surgeries and joint replacements of knee, hip and finger joints. He is a recognized teacher in Orthopedics for MBBS, MS, and DNB students and also an examiner for various universities in India and DNB.

He started a joint replacement centre at Command Hospital Air Force, Bangalore. He has also performed first-time finger joint replacements in the state of Karnataka. Moreover, he set up a state of the art Artificial Limb Centre in Bangalore for which he was awarded the Chief of Air Staff commendation. He has many research publications and paper presentations to his credit. His main areas of interest include trauma, arthroscopy and joint replacements.