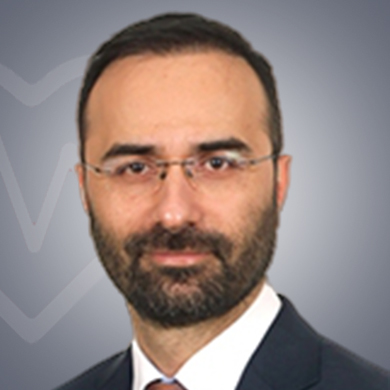 Dr.Pantelis is a highly renowned neurosurgeon in Greece. He is highly skilled and specializes in Neuro-Oncology,surgical skull base and minimally invasive Spinal surgery. He is well qualified and did his speciality in General surgery from NIMTS, Athens.He was the Scientific associate  of neurosurgery at the Tzanio Hospital, Athens. He went on to pursue his Education in Pediatric Neurosurgery, Munich, Germany. Dr. Stavrinou has been granted the DWG Master Diploma of the German Spine Society. He obtained his PhD from the Medical School of the Aristotle University of Thessaloniki. His doctoral thesis was on"Study of the expression of a group of genes and enzymes involved in the metabolism of drugs and xenobiotics in brain tumors"

Dr.Pantelis is an eminent personality in his field. He is known for both his accomplishments as a doctor and also as a professor.Dr. Stavrinou Pantelis  has a strong academic presence, with numerous publications in prestigious scientific journals like “EANO Guidelines for the Diagnosis and Treatment of Meningiomas”;”Independent Risk Factors for Postoperative Seizures in Chronic Subdural Hematoma Identified by Multiple Logistic Regression Analysis”

He is the organizing director of the international Cologne Skull Base Course, and invited faculty member in many neurosurgical anatomy courses throughout the world.He has won many awards including the 1 the Research Project Prize for his doctoral thesis,Awarding of Excellence in Pathology of Pathological Anatomy.He is member of many associations like Greek Neurosurgery Company (ENHE),German neurosurgery company (DGNC).European Neuro-Oncology Society (EANO).

Get a Priority Appointment with
Dr. Stavrinou Pantelis

Send a inquiry
Frequently Asked Questions
How many years of experience does Dr. Stavrinou Pantelis have as a neurosurgeon in Greece?

Dr.Pantelis has nearly 17 years of experience as a neurosurgeon

What are the primary treatments and surgeries does Dr. Stavrinou Pantelis provide as a neurosurgeon?

His primary treatments and surgeries are in Neuro-Oncology,surgical skull base and minimally invasive Spinal surgery.

What associations is Dr. Stavrinou Pantelis part of?

When do you need to see a neurosurgeon such as Dr.Stavrinou Pantelis ?

We can consult a Neurosurgeon such as Dr.Stavrinou Pantelis  for queries related to neurology,neuro oncology,minimally invasive spinal surgery or skull surgeries

How to connect with Dr. Stavrinou Pantelis for Online Consultation through MediGence?

He can be easily consulted by registering your profile with MediGence and writing down your enquiry.A meeting with the surgeon will be scheduled. Following which the  online consultation can be done.