Should I go for ICSI to increase chances of IVF success?

Male infertility was always an issue. However, its rate of incidence has increased considerably over the last few decades because of unhealthy changes in the lifestyle. Additionally, with the advances in medical technology, it is now possible to diagnose male infertility successfully, which was only a distant possibility a few years back.

Be it male infertility or female, both these conditions can cause an immense emotional distress among the couple in question. Managing infertility is a tedious task to do for such couples. A majority of them opt for non-surgical interventions such as lifestyle adjustment, exercising, and medical management to overcome infertility. Partners who are not able to conceive naturally even after years of attempts often resort to artificial reproductive techniques (ARTs) for help.

In vitro fertilization (IVF) and intracytoplasmic sperm injection (ICSI) are the two most common ARTs that are in use today. However, a majority of infertile couples often find it confusing to differentiate between the two. Additionally, there are often not sure when to opt for IVF or ICSI and what benefits do they both offer.

This article explores when should a couple opt for IVF or IVF with ICSI. Additionally, it details whether ICSI is a success tool for IVF.

Everything You Need to Know about IVF

The Basic Difference Between IVF and ICSI

The basic difference between in the IVF and ICSI is in the environment that the specialists use to conduct them. In the case of IVF, the eggs and sperms fertilize in a Petri dish. However, in the case of ICSI, the embryologist give a special boost to the sperms using a micromanipulator so that they can get into the egg.

The ICSI allows the selection of a good sperm for direct injection into the egg. This, therefore, increases the chances of successful fertilization. While specialists advice using IVF in the case of female and male infertility or both, they advise ICSI especially for the following cases:

IVF with or without ICSI – Which one to choose? 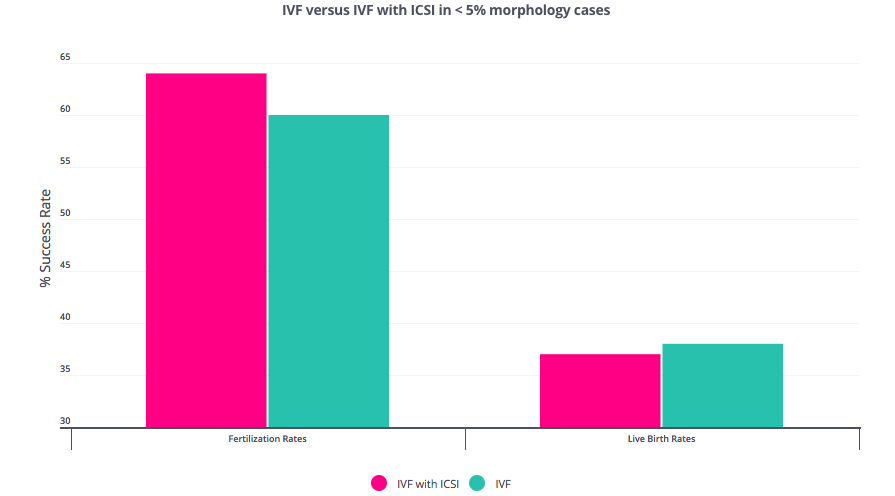 The success rates of IVF and ICSI, both, are equally good. However, some infertility experts prefer doing IVF with ICSI than just simple IVF. This is because of specific reasons apart from the most obvious cause of female infertility.

At the time of ICSI, the oocytes are denuded before the procedure. Therefore, the infertility specialist can actually examine and assess the quality of the oocytes at this stage. This is quite important to do in case of women who are above 35 years of age and other women who have a poor ovarian reserve.

Thus, ICSI can act as a checkpoint and present the exact success rates to the couple if the quality of the oocyte is bad. Accordingly, the couple can arrange for an egg donor is the oocyte from the female partner cannot be used properly. This helps save unnecessary expenses associated with repeated IVF cycles resulting due to poor egg quality.

There is one more reason why it could be wiser to go for ICSI even when the male counterpart has a normal sperm count. Some of such males may still have total fertilization failure. This is an unexpected blow that may completely devastate the couple emotionally and financially if it happens. There is no way to identify total sperm failure before IVF and if it happens, all the efforts, time, and money that goes into the expensive IVF cycles go waste.

In case of total fertilization failure, the couple has to start another IVF cycles with ICSI. By opting for ICSI at the first instance, the incidence of such cases can be automatically prevented. However, that does not mean that IVF proves unsuccessful for most of the couples. In fact, a majority of them are able to conceive in two to three cycles of IVF.

Check out the Top Certified Hospitals for IVF

Some Myths About Icsi That People Must Stay Away From

Many people believe that since a sperm mechanically enters the egg at the time of ICSI, it may harm the latter. However, that is not true. The damage to the egg is less than two percent if If the procedure an experienced embryologist carries out ICSI.

ICSI May Result In Abnormal Embryo

It is a common belief that the healthiest sperm fertilizes the egg in IVF. However, if the embryologist selects an abnormal sperm during ICSI, then the resulting embryo will also be abnormal. However, this is not true. In ICSI, the embryologist, in fact, has a chance to select the healthiest sperm for fusion. There are millions of couples that have conceived healthy and completely normal babies so far using this technique.

ICSI May Cause Genetic Deformity

There is no reason to worry that ICSI may cause a genetic defect in the resulting baby. If the sperm of the male partner has a Y chromosomal microdeletions, then the male baby will also have Y chromosomes with the same microdeletion. However, if the sperm is healthy, then there are no chances for the sex chromosomal defect or any other genetic malformation to appear in the baby.

However, it is always better to discuss the case with an experienced IVF specialist before choosing to favor any technique. An infertility expert analyzes the case and selects the best approach for treatment based on individual health profile and needs.

In a field where patients are desperate for good outcomes, many doctors think it is a mistake not to employ every weapon in their arsenal. Especially when they believe the costs and risks of using treatments like ICSI are relatively harmless. Of course, most doctors will acknowledge that their perception of cost may not be in line with that of their patients, and many patients, when making such an emotionally-charged decision, have trouble calibrating risk rationally.

ICSI costs today are approximately $800 – $2,500 depending on where you live and it should be said, typically those costs represent a fraction of the cost of doing a single IVF cycle. As for the medical risks, most studies indicate the impact of employing ICSI are small on an absolute basis, but since ICSI is a delicate procedure and bypasses natural selection, employing ICSI carries more risk than utilizing natural insemination.

Looking for a cost estimate for IVF